Once the installer has completed successfully, OpenRTM-aist can be tested using the included sample components. These are typically stored in one of the following locations:

We will use the SimpleIO components to check that OpenRTM-aist has built and installed correctly. 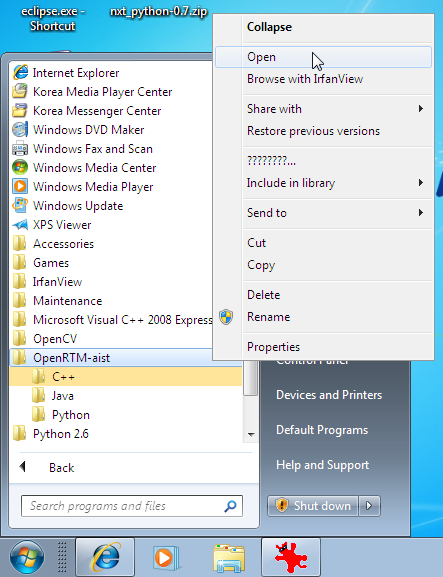 First, a name server that the components can register on must be started. Start it using the shortcut in the Start Menu at [OpenRTM-aist 1.1] > [tools] > [Start Naming Service]. 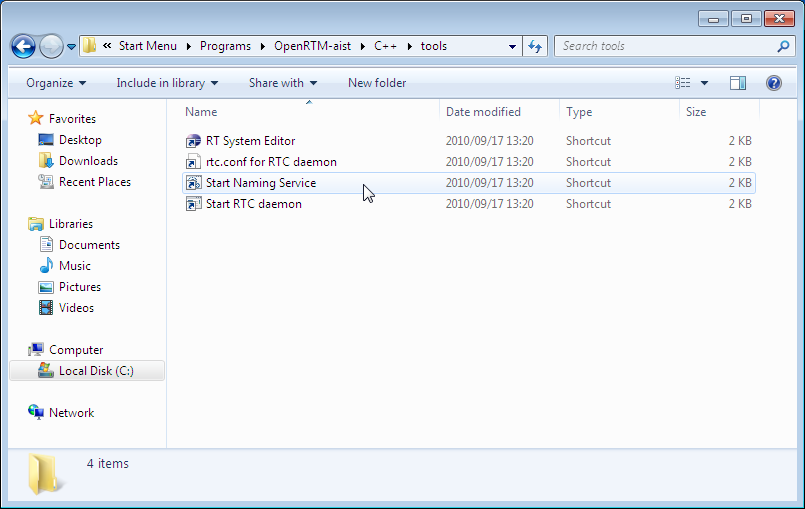 The shortcut to the name server. 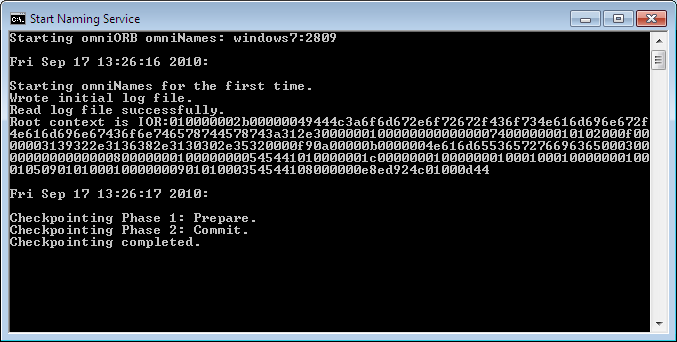 When the console doesn't open

Sometimes the name server console does not open. There are several possible causes for this, described below.

If using the MSI package provided by openrtm.org and selecting a custom install, it is possible to install OpenRTM-aist without installing omniORB. This is also a possibility if installing OpenRTM-aist manually. Check that omniORB is installed.

The OMNI_ROOT environment variable is not set

The "Start Naming Service" shortcut executes a batch file located at %RTM_ROOT%\bin\rtm-naming.bat to start the name server. It uses the OMNI_ROOT environment variable to locate the omniNames.exe executable. When installed using the standard installer, OpenRTM-aist will set this variable correctly. It may not, for some reason, have been set. If you installed OpenRTM-aist manually, it will not be set. Confirm that the variable has been set and is pointing to the correct location. From the control panel, select "System" >> "Advanced system settings" >> "Environment variables" and check the variable is in one of the lists.

If your user name contains two-byte characters, omniNames.exe may fail to start because it cannot create the log file folder. In this case, setting the TEMP environment variable to a location that does not include two-byte characters typically corrects the problem. For example, create a directory such as C:\temp and change TEMP to point to this folder. Then, edit rtm-naming.bat and add the following lines to the top.

In rare cases, the host name or address settings of the machine may be incorrect, causing the name server to start incorrectly. Informing omniNames.exe of the correct IP can resolve this problem. Set the OMNIORB_USEHOSTNAME environment variable in the following way (the example assumes the host's IP is 192.168.0.11):

After starting the name server, start some suitable components. The OpenRTM-aist start menu folder contains a sub-folder called "Examples," which contains many components as shown below. 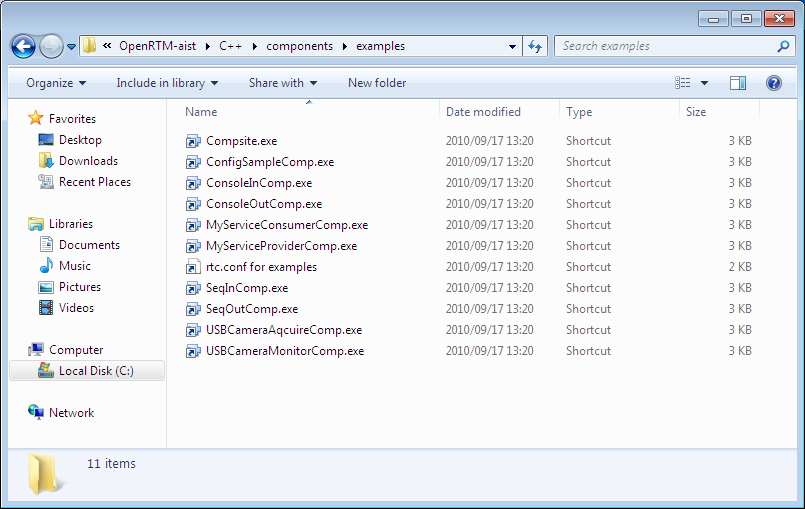 When the components don't start

Sometimes the component consoles do not open. There are several possible causes for this, described below.

The console opens and immediately closes

Try creating a minimal rtc.conf, as below.

The components terminate with a runtime error

If the libraries are not correctly installed or the settings are incorrect, it can cause a runtime error. Try completely uninstalling OpenRTM-aist and re-installing it. 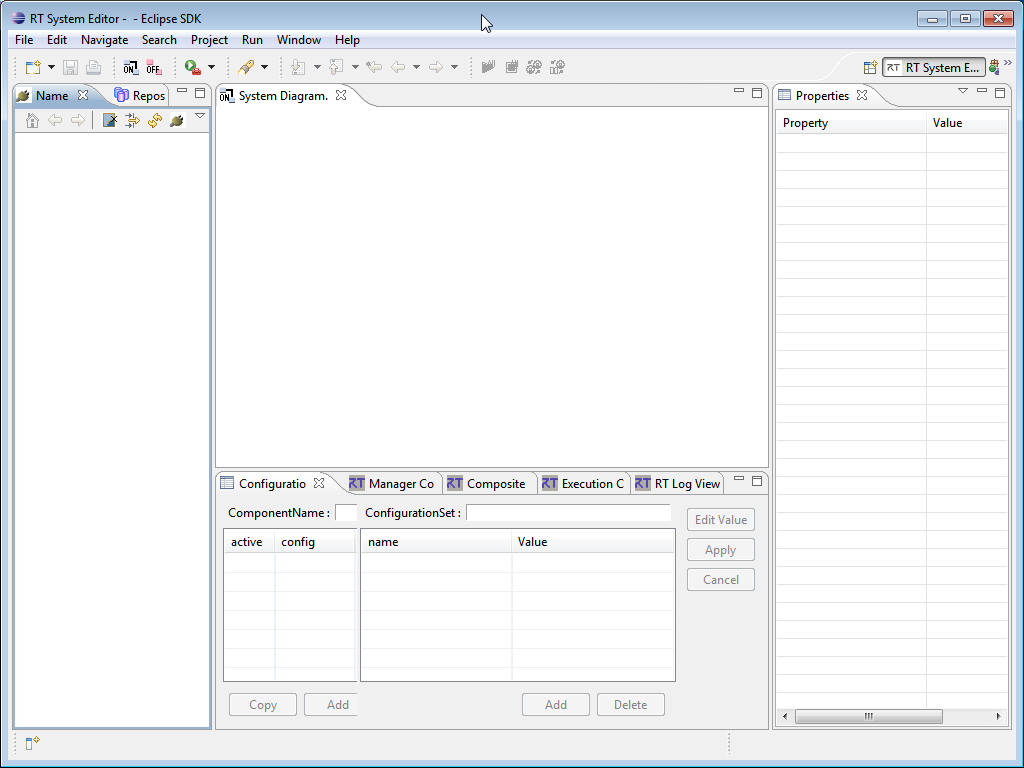 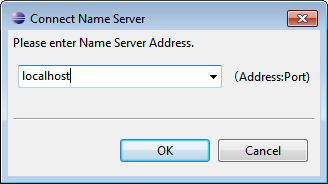 Connecting to a name server

The name server running on localhost will appear in the Name Service View. Open the tree branches by clicking the arrows to find the two components you started. 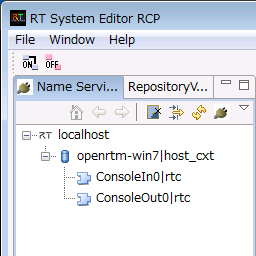 Components registered on the name server

. The editor will open in the central pane. Drag the components

from the name service view into the editor.

The OutPort of ConsoleIn0 is displayed on its right-hand side

. Drag from this to the InPort on the ConsoleOut0 component

to connect these data ports. The connection dialog will be displayed. Click "OK" to accept the defaults and connect the components. 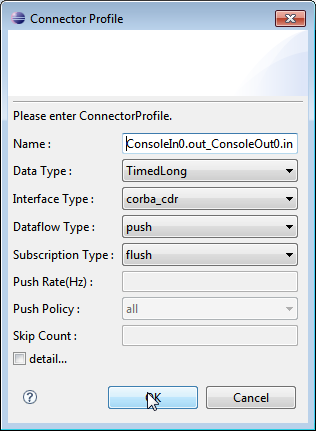 A line indicating the connection will appear between the two ports. Next, click the "Activate All" button

in the toolbar. This will activate all components in the editor at once. Active components will appear green.

Enter a number and press enter. This number should fit within a short int. Look at the ConsoleOutComp terminal. The number you entered should have been printed out. If this is the case, OpenRTM-aist is functioning correctly.

If the start of RTSystemEditorRCP (RTSE) does not start

If the following message appears and RTSystemEditorRCP (RTSE) does not start up, you need to install the 32-bit Java operating environment (JRE) or Java development environment (JDK). If you select JRE for change installation, it will be installed. To uninstall or change the program in the control panel, right click on OpenRTM - aist and select "Change". For JRE selection on the installer screen, OpenRTM-aist in 10 minutes! page. 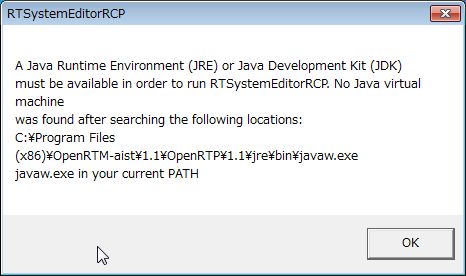 Other sample components are included in the installed OpenRTM-aist. They can all be used in the same way as the above example.