OpenRTM-aist is a framework to support the easy development of RT-Components (RTCs), modularising existing source code and libraries or newly developed software. The following figure shows the RT-Component development flow. 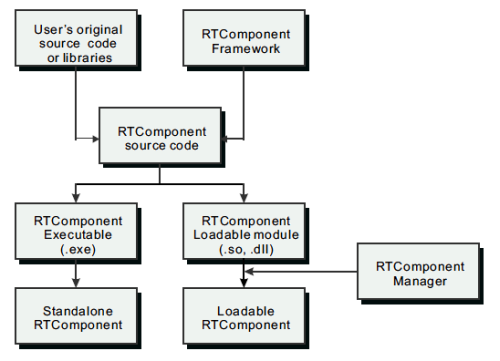 Usually, a component developer embeds existing library functions, class libraries, etc. to create a component using the framework. Through this, they create an RT-Component using existing resources, allowing considerable software reuse. RT-Components can be deployed into a network and used as distributed objects.

The basics of RTC programming

Program without a main function

Unlike common programs, there is no "main" function in an RT-Component. An RT-Component is implemented as a class that inherits from a special base class.

The set of states an RT-Component travels through from creation to destruction is called its life cycle. The folowing three basic states exist:

State transitions of an RTC 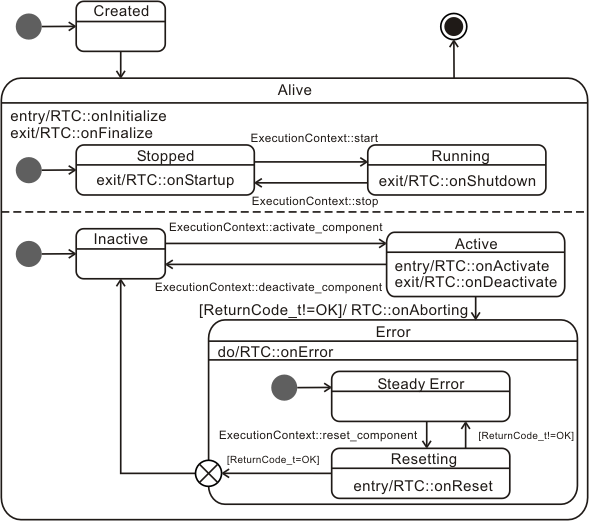 The state machine of an RT-Component.

Created and Alive are states of an RT-Component. The Alive state has sub-states.

Let's begin with the upper part of the state machine, with the Stopped and Running states in the Alive state.

Stopped state and running state of an RTC.

These states indicate whether the execution context thread is stopped or running.

The lower part of the alive state is the core logic states active, inactive and error.

An RT-Component is in the inactive state immediatly after creation. When it is activated, the onActivate state action will be called and the component will enter the active state. During the active state, the onExecute state action is repeatedly called. Usually, the main logic of an RTC is implemented in onExecute. For example, typical robot processing tasks such as reading data from sensors and controlling motors based on the data received from other components will be described in onExecute callback function. 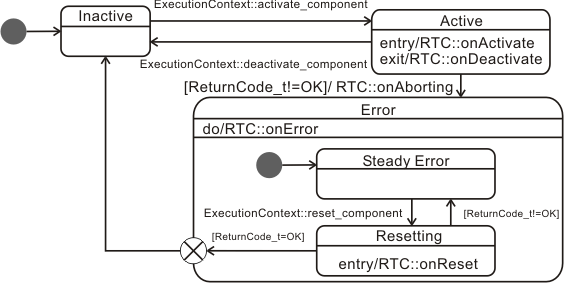 An RT-Component developer must consider which logic to implement in each state. Un-used states do not require functions to be implemented. Only those functions being used should be overridden.

The table below gives the function and role of each state action.

‹ A guide to RTC programming up Data Port (Basic) ›

A guide to RTC programming