A Robotics Information Day was held on the 11th of December, 2012, at the OMG Technical Meeting in Burlingame, CA, USA.

A range of presentations about standardization results (RTC, RLS, RoIS, DDC4RTC) achieved by the OMG's Robotics DTF (Domain Task-force) were given. Presentations were also made about applications of and related activities to these standards, including future plans.

Change Vision, Inc., Honda R&D and JASA joined the Robotics DTF as new members. Presentations were given by these new members, as well as existing members ATR, AIST, NEDO Intelligent Software Project, and Toshiba (from Japan), and Future Robot, Sejong University, and ETRI from Korea. 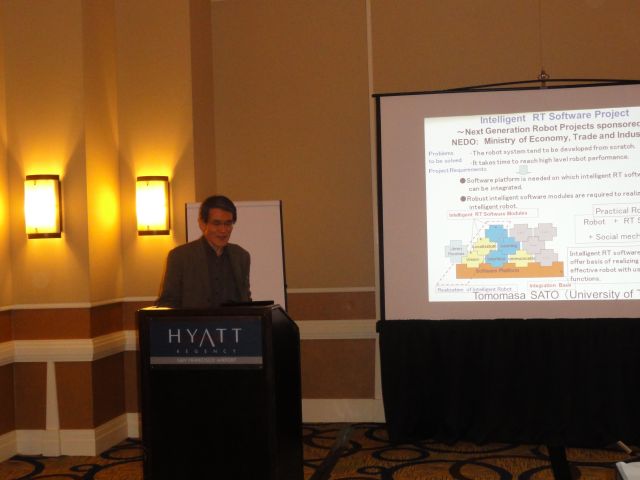 Results of NEDO's Intelligent Software Platform Project, which ran from 2007 to 2011, were introduced by the project leader, Prof. Tomomasa Sato. The aim of the project was the development of intelligent modules based on RT-Middleware, and the accumulation and reuse of modules. Developed modules and results related to mobile robot navigation, manipulation and human-robot interaction were introduced. Additional activities, such as certified dependable middleware development, a ROS-RTM interoperability environment and the continuous integration of these software, and disaster response applications were also introduced.

Implementation of OPRoS to a Human-friendly Guide Robot, FURO 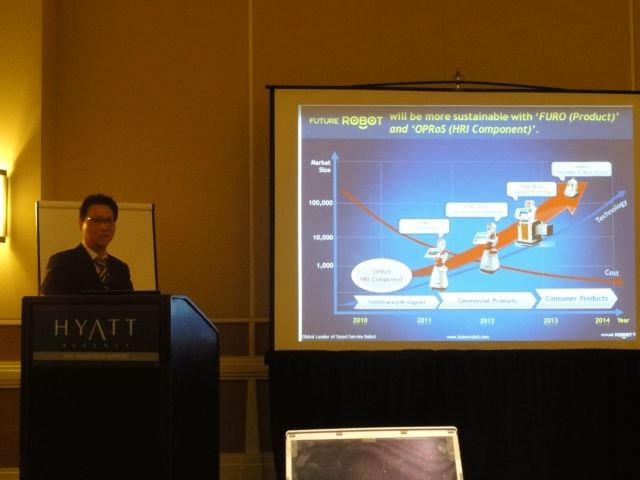 A business developing service robots using OPRoS were introduced by Mr. SeeKyeong Song, CEO of Future Robot Inc. in Korea. They have developed a range of service robots, called FURO, that provide mainly information services in shopping malls, at event sites and in homes. The robots use the OPRoS robot middleware developed by ETRI. The system architecture of FURO and future business plans were introduced. 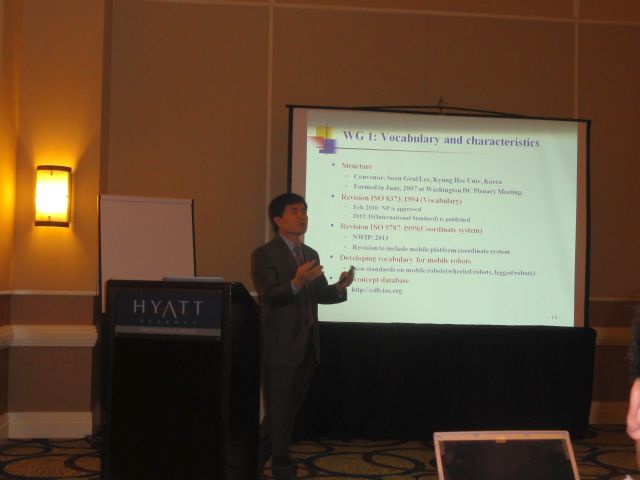 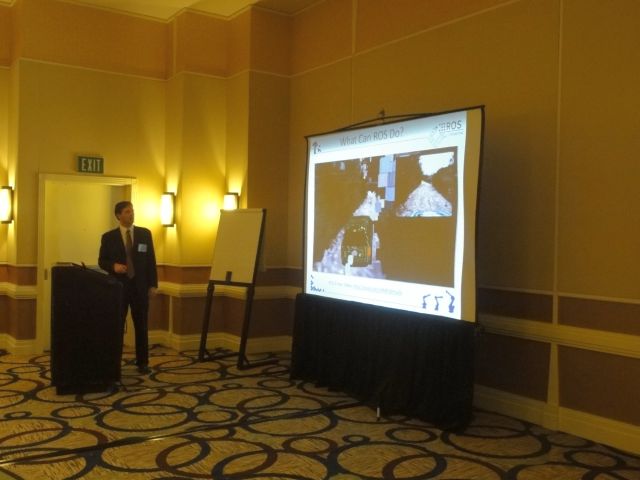 The ROS Industrial project and consortium, which recently launched, were introduced by Mr. Paul Evans from Southwest Research institute. They are planning to introducing ROS to industrial robotics and industrial applications. ROS Industrial will contribute code quality management, documentation, tools and additional modules. 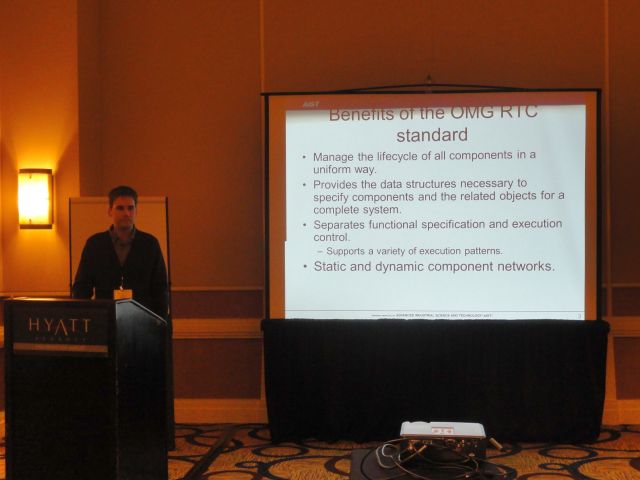 An introduction to the OMG RT Component standard. The technical benefits of the standard were introduced, as were the various implementations, of which there are currently 10. RTC 1.1, the most recent version of the standard, was also introduced. 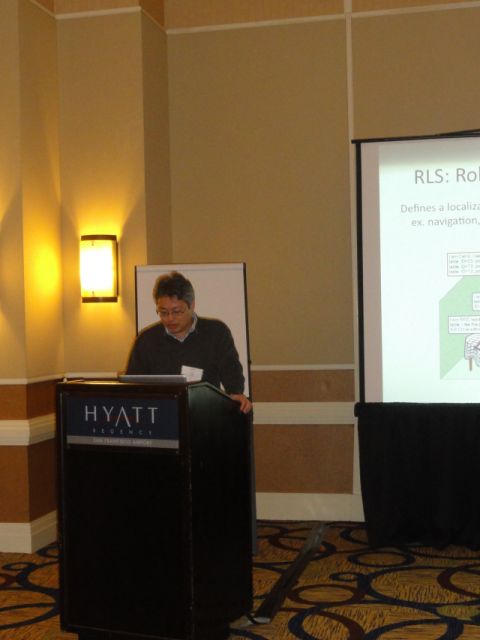 The concepts and history of the Robot Localization Service (RLS) standard were introduced.

The Robotic Interaction Service Framework, which specifies human-robot interaction facilities, was described, along with a description of the Ubiquitous Networked Robot Framework, an example implementation of the standard.

Introduction to Dynamic Deployment and Configuration for RTC (DDC4RTC) 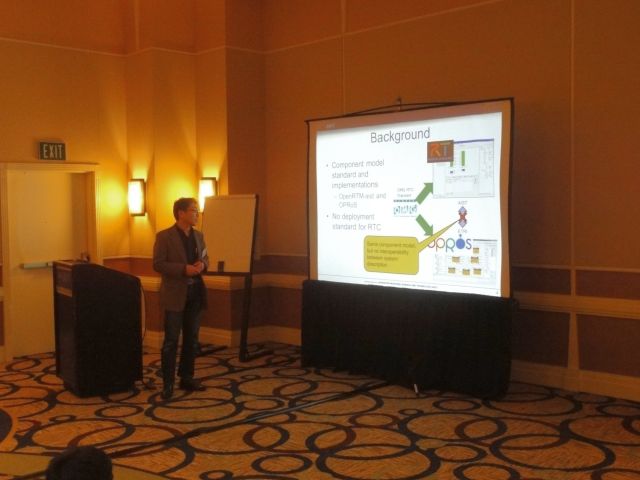 The DDC4RTC standard for RT Component deployment, which is currently under development, was introduced. In particular, a description of the ApplicationSupervisor, which provides dynamic reconfiguration capability, was given. 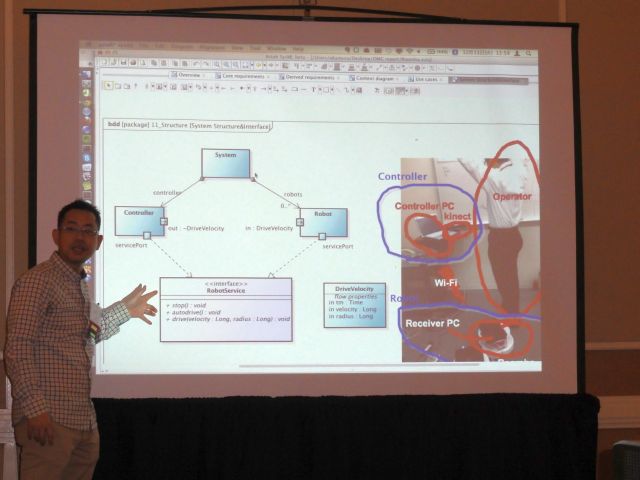 A presentation and demonstration of using the astah UML tool and its SysML extension, developed by Change Vision, Inc., for modelling and developing robot systems. The astah tool features good usability, mindmapping, and web-based model sharing/commenting, allowing for efficient team-based development. It is also capable of interacting with running RT Component-based systems. 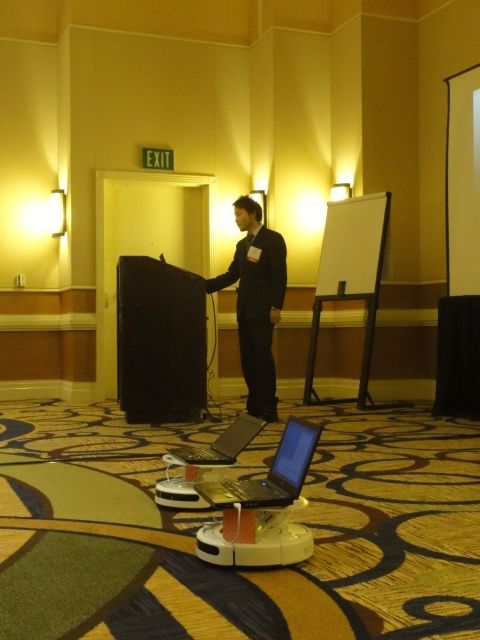 Honda R&D demonstrated their implementation's compatibility with OpenRTM-aist in a live demo using two Roomba robots. A Microsoft Kinect and one Roomba ran on OpenRTM-aist, while a state machine robot controller and the other Roomba ran on Honda's RTM. The Kinect was used to provide user commands to the controller component, which managed the robots.

Implementation of RoIS to robots in ETRI 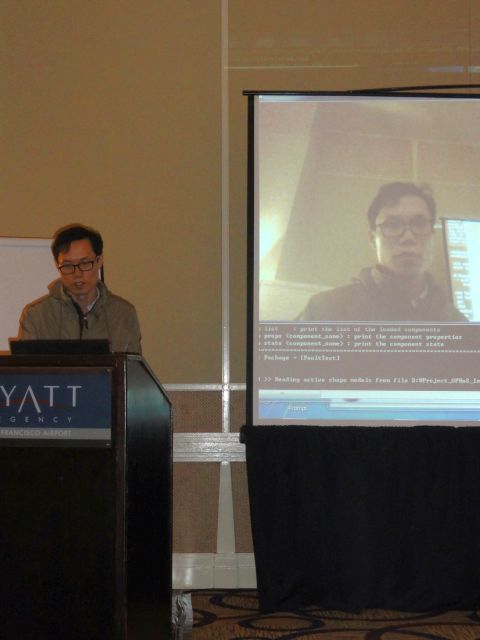 Dr. Jung from ETRI described Korea's national project, OPRoS, an implementation of the RT Component standard. The basic concepts, architecture and tools were introduced. OPRoS has many similar features to OpenRTM-aist, but also adds an event port. It supports Windows, Mac OS X, Linux, Android and iOS, and is available as open source software. 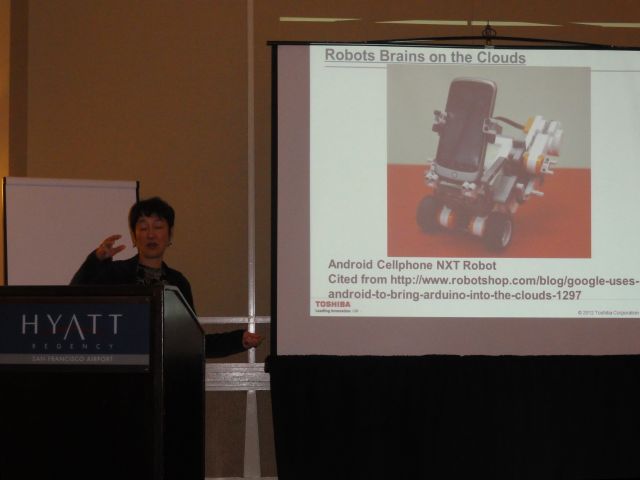 Dr. Doi of Toshiba introduced the Cloud Network Robotics topic. As part of this work, an acceleration sensor is used to sense human activities. Toshiba'S new robot, the ApriPetit, was also introduced. 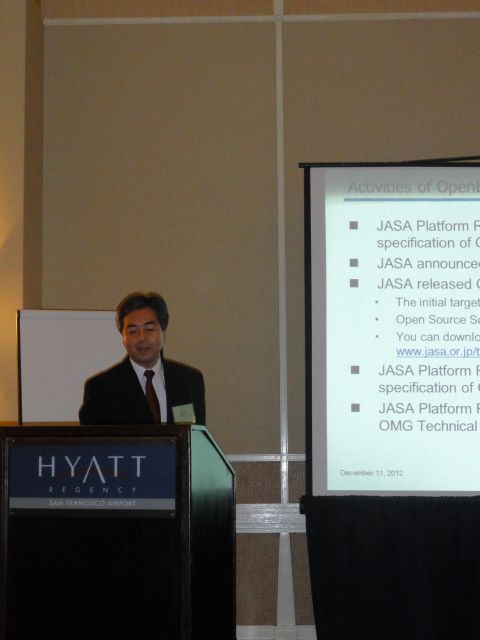 Kenichi Nakamura of the Japan Embedded Systems Technology Association presented an abstraction layer for embedded devices, known as OpenEL. OpenEL provides a common API to access and control various devices such as motors and sensors, and supports a range of operating systems. Currently support is included for the Lego NXT sensors and motors. They are proposing adding Android support and working with OpenRTM-aist and ROS.